Which is the Best CCTV Camera Security System? 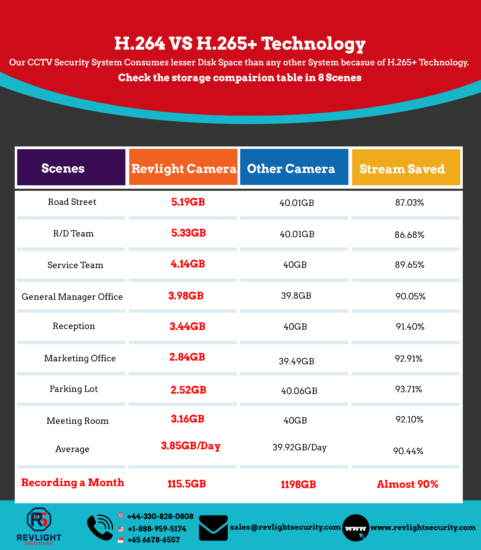 As per the research and active development has led and made us to know about various things about CCTV Camera Security System technically as well as usability, Considering these points we have compared our products with other company’s camera.
We just don’t say we do it.
Technology used in Revlight Security
As compare to other cameras our camera have the best technology H265+ which just not only save the space but not burdening the hardware.

Where as the other company’s use the H264+ technology which is way behind Revlight CCTV Camera Security System technologies.

This makes Revlight Security Camera easier and faster to use.

This IP camera security system have more capabilities than any other CCTV camera we have got the various technology feature likes of consumption of space by the system we can easily save the space by around 1004GB consumption of the space.
our CCTV Camera Security System are best in the world as these comes with the following less space consumption as compare to the following scenes and lighting.

Difference of space with cameras currently available in the market?

these space consumption is too less where as ordinary camera would have taken around 40.1GB of space.

if compare another scenario of general manager office where the light of the office is much but screening of the image is not that wide, where the ordinary camera takes around 39.8 GB of space where as the Revlight Security camera takes only 3.98 GB of space the average space saved is around 90% so it can saves the lots of memory as compare to the other cameras.

quality of the image is also high class where Revlight camera record in Full HD 1080p mode where as the competitor only can record the video in 720p HD mode only.

These are the main difference between our camera and other cameras. Now its up to us which camera to choose. Which is the best CCTV Camera, Revlight or others.
Follow Us on Socials Facebook.

500+ people have put their trust in Revlight, How about you?